“I’ve lost seven kilos in these first few months,” answers Dirk von Haeften to the question of what it was, then, ten years ago, when the bank opened in late 2005. The weight loss started with the opening ceremony. It was going to be a big celebration, but instead of the usual third, almost all the invited guests confirmed. A huge tent had to be built in addition on the street, permits were needed, more furniture, more cutlery, heaters …

Onethousandthreehundred guests appeared on November 2nd, 2005 for the opening ceremony; fourhundred of them still danced at four o’clock in the morning on the dance floor. “That night,” he says later, “it dawned on me, what it meant to open a huge restaurant in a prominent downtown location – without having previously worked as a restaurateur.”

After studying in the United States, Dirk von Haeften – his father was a well-known asset manager – worked as a banker, more specifically as managing director of the real estate subsidiary of M.M. Warburg Bank. Committed, as he says, but with increasing unrest; more and more often he asked himself the question, if that was all? No, it is not yet, he decided and vigorously pressed the restart button in his life. Food and drink have always been an important theme in his life since he was allowed to sip his father’s Bordeaux for the first time at the age of ten – it seems to have tasted good.

Dirk von Haeften undertook a four-week journey through the world in 2004. In the luggage was a suitcase full of books about the most famous restaurants in the world. Somewhere between the New Yorker “Balthazar” and the Parisian “La Coupole” he finally came up with the idea: In Hamburg, a restaurant is missing that can withstand the comparison with the most beautiful brasseries in the world. Back in the Hanseatic city began the search for a suitable location. It should be a place that has history that, like all good brasseries, radiates tradition and timelessness. When he first entered the former halls of Hypothekenbank Hamburg AG in the Hohe Bleichen, he knew that he had found this place. Although the premises had suffered greatly during decades of use as open-plan office, the substance had the grandeur that it needed to play in the gastronomic Champions League. Several interested parties wanted to get hold of the exceptional premises. A fight for the bank began. For the financing of the brasserie DIE BANK, thirtyfour friendly Hamburg business people and families could be won – with a fund concept that was completely new to the restaurant business. At the end Dirk von Haeften could sign the contract with the owners of the house and after eleven months of reconstruction and later costs of two million euros, the grand opening ceremony seemed like the happy ending for all efforts: Tout-Hamburg was thrilled by the premises of DIE BANK. Euphoria was spreading. The rest seemed to be just a breeze. It turned out that it takes more for the success of a restaurant than just a good idea and great architecture. “The most important thing,” says Dirk von Haeften, “is that the guests leave the restaurant happier when they come.” He laughingly adds, “That only worked in part at the beginning.”

With Fritz Schilling he had committed a two-star chef, who attracted press and audience with his reputation – and with Dominic von Werthern an experienced manager stood to their side. But the young service team was not yet rehearsed, the menu too long and the crowd large. Regularly the nerves of he kitchen crew were in tatter. In the first three months after the opening Dirk von Haeften lost more kilos.

„In hindsight, I would say: Lucky I had so much stress at this stage – there was no time to question my decision.” The entire team had to make a pretty steep learning curve. It worked. The bank had found its guests after half a year. Today it is a gastronomic institution. Not only for Hamburg. When Dirk von Haeften recently adopted a group of fashion bloggers after an event at DIE BANK, one of them says: “Too bad we do not have such a restaurant in New York.”

Nobody could have said anything more beautiful about the tenth anniversary. 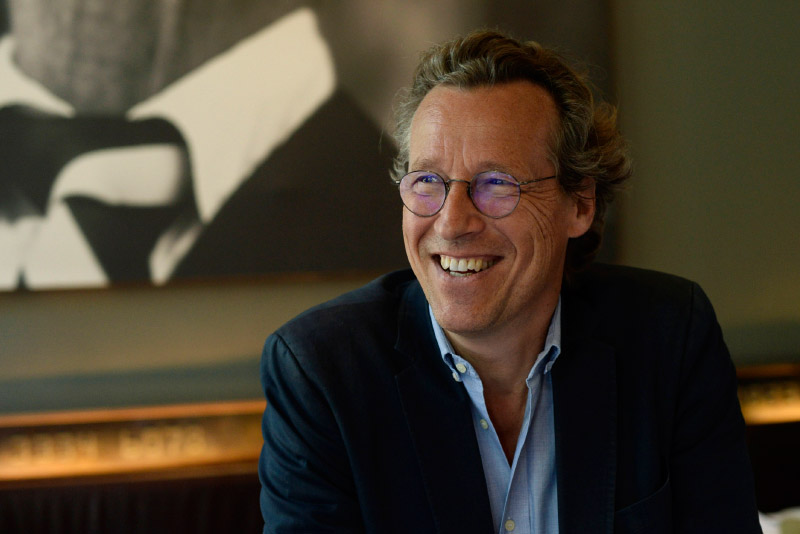